​​How Does Your Age Affect Your Career Success? 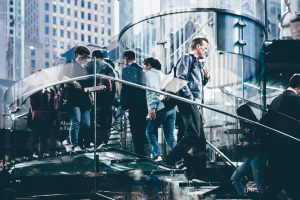 I’ve heard this subject debated back and forth in Job-Fair seminars, with HR types quoting anti-discrimination law to a front-row full of sixty-year-olds who sit there shaking their heads as they hold up resumes they’ve been sending out continuously for eight months. The reverse situation is just as concerning to younger millennials who are ready to move up in status, position, and compensation, but can feel the resistance from management because they’re considered too young to take on that level of responsibility.

Episode 48 - How Does Your Age Affect Your Career Success?

I’ve heard this subject debated back and forth in Job-Fair seminars, with HR types quoting anti-discrimination law to a front-row full of sixty-year-olds who sit there shaking their heads as they hold up resumes they’ve been sending out continuously for eight months. The reverse situation is just as concerning to younger millennials who are ready to move up in status, position, and compensation, but can feel the resistance from management because they’re considered too young to take on that level of responsibility.

Hey, welcome back. This is Roger Reid with another episode of Success Point 360

I’ll start by telling you that the subject of age in the workplace is plagued with inaccurate generalities. The two I hear the most is……….

If you’ve acquired a decade or more of work experience, you know that both of these assumptions are not only wrong, they do an injustice to age groups at both ends of the spectrum. And yet, some of these beliefs are so permeated within the current work culture, that “pre-emptive warnings” are becoming commonplace. I’ve even heard management consultants advise a room full of Gen Z’s to take on extra responsibility and show up early and stay late to counteract the widely held misconception that the younger generation puts far more emphasis on their personal life than their careers.

Attitudes toward younger hires and aging employees vary with the particular company. A good barometer of a company’s mindset is often reflected by the average age of its employees. While the number may not necessarily reflect the company’s predisposition about the preferred age of their workforce, it can tell you a lot about how you’ll fit in.

For example, if you’re fifty-five and applying for a job at a software development firm where the average age is under thirty, you’re going to stand out like a sore thumb. More than the possibility of feeling uncomfortable with the age gap, you may also experience difficulty in having your ideas and opinions considered with equal weight to that of someone half your age.

We’re not talking about fair. We’re talking about cultural and environmental influences reflected in the workplace, and occasionally, within an entire industry.

In general, the larger the company, the more you’ll find age diversity, simply because a greater number of employees often reflects the demographics of the general adult population. For example, in a larger company, an annual flock of new hires, typically right out of school, will join an established and aging workforce, resulting in a more “age-balanced” environment.

There are exceptions. Typically referred to as “new generation” industries, these hi-tech startups often internally clone themselves as an erroneous prerequisite of ensuring technical and market familiarity. This assumes older workers are not as likely to possess the specific education, training, or be aware of the rapidly changing competitive influences associated with the products and services these companies produce.

Before we continue, it’s important to understand that age bias and prejudice can happen at both ends of the spectrum. While most people associate age discrimination with the aging employee—someone who is managed out and replaced with a younger counterpart, or an older worker who is passed over for a promotion in favor of someone younger—the reverse situation can also be true.

Here’s an example: I’d been with Acme about six months when the VP of sales invited the current crop of new hires to lunch. We’d assembled in Milwaukee for a week of training, and the lunch invitation was a customary tradition to increase rapport between management and the company’s newbies.

On the day of the luncheon, we were told we would not be eating in any ordinary restaurant. Instead, we were about to have a rare and unusual experience. Our meeting had been reserved at a private club that catered specifically to elderly men . . . and their fathers.

Eaton’s upper-level management received membership in this age-honoring establishment as a perk, an indication that a preferred criterion to move up into the lofty levels of management was a birthday at least fifty years in the past. Like a fine cheese, you were expected to age a bit before you would be considered worthy of joining the big table.

So big question: Isn’t age bias against the law? Yes, outright age discrimination is illegal, so it’s doubtful you’ll be confronted with overt prejudice due to your age. However, you will be judged, labeled, sorted, and ranked due to age-related issues—including your appearance.

Your best defense against age discrimination? Try the following suggestions to mitigate management’s tendency to categorize an employee’s potential based on age, regardless of which end of the age scale is the prevailing norm demonstrated by your industry or company bias.

If you’re twenty-six, does that mean you can wait four years before worrying about presenting a professional appearance? In a word, no. Especially if you expect to find that coveted management opportunity waiting for you.

If you need an example of your company’s expectations, look at your current manager. That’s your model. If your manager is of the opposite sex, look for a same-sex management counterpart. If she wears a suit or slacks with a jacket, and you work in the same environment, do the same.

You can also take a cue from the most successful in your job category. As a sales engineer working out of the Phoenix office, I quickly adopted the accepted uniform of the day: a pair of slacks and a conservative, button-down shirt. It was a comfortable change from the Denver office, where I wore a suit and tie every day. However, during a training junket to Los Angeles, I saw the LA salespeople adhered to the same dress code I’d seen in Denver. So did those from San Francisco, Salt Lake City, Seattle, and Portland.

Phoenix was the exception. The city’s laid-back, informal atmosphere influenced the fashion of business, and while there was no appreciable difference in sales performance between Phoenix and the other offices, over the next few years, I noticed the employees from other locations getting the lion’s share of the promotions. Looking back, I can see how “looking the part” influenced upper management’s decisions. Those suit-wearing salespeople were dressing like managers, a subtle signal they were ready to perform the function more effectively than someone who didn’t appear interested in the position because of the way they dressed.

What about offsetting any concerns about your age by giving your job more priority than your personal life? The more frequent example of putting your job first is giving up your vacation.

I could cite all kinds of studies that show the advantages of taking vacations. However, the following story does a much better job at making my point:

After ten years at Eaton Corporation, I’d earned three weeks of vacation, but as December rolled around, I had not taken a single day off. That particular year had been especially hectic. One of our sales engineers had been transferred to another office, leaving us shorthanded. And after six months, his replacement was still a couple of months away. As a result, my inside sales assistant, Jill, and I took over his customers, including all associated order administration and follow-up.

Taking a vacation that year was simply not an option. In the most literal sense, taking time off work would have damaged the companies relationship with dozen of customers, cost hundreds of thousands of dollars in lost business, and put an unacceptable workload on my assistant—something I refused to do.

As I looked at my planning calendar to determine the days our office would close for the December holidays, I realized I had enough vacation days to take the entire month of December off—an impossible fantasy.

I mentioned this to my boss who responded by acknowledging my loyalty to the company and then added he would ask the regional manager—who was in the office that day—to approve additional compensation equal to a month’s salary, financially offsetting my forfeited vacation time. In his mind, there was no question I had given up my vacation due to company circumstances, and more importantly, the company had benefited from it.

Believing Mr. Regional would approve the request, my supervisor posed the question to him while the three of us were in the same room.

Mr. Regional got a bothered look on his face and mumbled, “That’s not possible.” Directing his comments at me, he added, “You should take your vacation days when they’re available. Giving them up is a personal decision, and the company can’t be responsible for poor planning on your part.”

Until that day, I’d never realized how far a person could put their head up their ass. This guy recognized value only when it was of benefit to him. Since he didn’t see how pulling several thousand dollars out of his discretionary account would be of any immediate advantage to him personally, he attacked my well-intentioned efforts with criticism.

So that year I gave the company an extra three weeks of uncompensated work. Double work in fact—my own and, with Jill’s help, that of the missing salesperson. I also learned how much the company valued and appreciated my sacrifice, in dollars and cents—terms we both understood.

So, take your vacations. If you’re concerned that an extended absence could hurt your career, take smaller breaks in the form of long weekends, or extending holiday vacations. Turning a three-day legal holiday into a five-day vacation is another way to use your vacation time, with your absence being less obvious to management.

Hey, that’s it for this episode.  If you have questions or comments, you can use the voice mail tab, located on the main header of the website, www.successpoint360.com.  You can also send an email to: roger@rogerreid.com.

This episode brings season four of the podcast to a conclusion. I’ll be taking a break for a few months to research new topics and begin work on season five. Check for scheduling updates on the successpoint360 website.

Thanks for listening, and I’ll see you next time.

For more information about the author, his work, or to subscribe to this podcast, visit www.SuccessPoint360.com Be sure and check out my new book now available on Amazon in eBook. It’s titled Better Mondays: The New Rules for Creating Financial Success and Personal Freedom (While Working For the Man)

I’ve lowered the price for the Kindle version, so if you or someone you know is struggling with a job that doesn’t provide anything more than a paycheck, or you’re ready to use your employer as a launching pad to start your own business, you’ll find the tools you need to take control of your professional success and to change your life for the better.

You can find more information on my website, www.successpoint360.com. I’ve posted the first chapter on the site as a free read, so I encourage you to take a look.