Leap-frog To The Career You Really Want “Going back to school” is often thought to be a viable option for anyone considering a change in professions. But before you sign up for classes and pay your tuition, you may want to re-evaluate the cost by asking yourself what you’ll actually gain over the competition – especially since there are other, more effective and less costly ways to leapfrog your way to the career you really want.

“Going back to school” is often thought to be a viable option for anyone considering a change in professions. But before you sign up for classes and pay your tuition, you may want to re-evaluate the cost, not only in terms of your time and money, but what you’ll actually gain over the competition – the others who are also competing for a similar position in the same industry.

Hey, welcome back. This is Roger Reid, with another episode of Success Point 360.

Returning to school supposedly preparing the mid-career job changer with technical prerequisites and minimum educational requirements. The logic is simple: Formal education substantiates your knowledge and bestows you with “validated” credibility. It also helps level the playing field, providing you with the same advantage as other applicants who flaunt a formal education in the discipline.

The truth? While there are exceptions—for example, law and medicine—in most cases, you’ll be better off landing an internship or taking a part-time job to break into a new industry. You’ll learn the details first-hand and make valuable contacts that can help boost your career in the long term. Conversely, in a school environment, the focus is on a much broader base of knowledge (a curriculum), some of which (most of which?) turns out to be unimportant or unrelated to your eventual success.

Here’s a short cautionary story to illustrate the point.

In my sophomore year of college, I needed a part-time job to help pay for expenses. One of my instructors suggested I obtain a commercial radio license. He’d had one for years and worked every weekend babysitting the remote transmitter of an independent television station. And since my major was electrical engineering, I already knew the basic technology associated with radio and television.

For me, it was a natural.

I studied the course material, drove to the FCC testing location in San Diego, and took the test. I’d had my license for less than a month when a local radio station (KVOY) called the college wanting to know if any of the students held a commercial radio license. They needed a part-time DJ for night and weekend work. Out of the entire student population, two were licensed.

The station put both of us to work that same week.

Neither of us had any experience in broadcasting. I expected several weeks of training before finding myself sitting in front of a live microphone.

The training was completed in a single afternoon—six hours of on ON-AIR, LIVE work. I read from prepared copy and was told which button to push and when to push it. After the first hour, the DJ providing the training began leaving the booth. At first, he was gone for a minute or two. Then ten minutes. Then half an hour. If I got into trouble, I was to make sure the mic was off and yell for help. At the end of the day, he told me my first paid shift started the next day. And I would do it alone.

A few months later, that weekend job grew into a full-time position, and that summer, I did the afternoon drive-time slot, from noon to six pm, six days a week.

The point of the story?

It comes three years later, after I’d moved to Denver to start my job with Acme Corp. One evening, I was visiting with a young couple who lived in the same apartment complex. The husband worked a full-time job and was also going to a private trade school—to learn how to become a radio broadcaster.

He’d been at it for two years, had spent thousands of dollars on tuition, and was nearing the end of his training. Even so, he didn’t have his commercial license—yet. His “advisor” had told him the test preparation required “specialized training,” consisting of several additional classes he would need to take after completing the operations part of the course.

As he proudly boasted about his future goals—becoming a radio DJ personality—he admitted to having no idea about the current job prospects or how long it might be before he was finally working in the business. However, he was sure his advanced education would shoot him right to the top of the industry.

I hesitated to tell him about my experience at KVOY. I would be sticking a pin in his life-bubble. But I eventually decided a dose of reality might help balance all the hype and sales pitches he’d been listening to—and paying for—over the last two years.

In short, he couldn’t believe it. He’d been told the profession was extremely competitive, and the only way to ensure consideration from a potential employer was to have a professional broadcasting degree.

And yet, my personal experience offered proof that there were other ways into the industry—much quicker and less expensive ways.

The moral of the story is simple: Formal education does not necessarily grant automatic admission into a new profession. And compared to actual experience, a formal or traditional education can often be more of a detour than a direct route to accomplishing your career goals.

There are real advantages in “doing now, learning now.” There have always been two ways to achieve a goal. The first way is to follow the rules, read the books, stand in line, respect the process, and invest enough time for others to bestow you with personal credibility.

The second is called leapfrogging—find an opportunity that puts you as close to the action as possible, and then jump in. Don’t worry about the low pay or the fact that you’re taking an entry position. You’re gaining on-the-job experience. You’ll learn about the industry from the inside, and most important, you’ll make valuable connections that can help you move up.

(Author’s note: I credit Robert Ringer with the term and concept of Leapfrogging. Although it may seem like an obvious extension of common sense, the process offers a practical counterpoint to K. Anders Ericsson’s rule—popularized by Malcolm Gladwell—that advocates 10,000 hours of deliberate practice being required before one can expect success, or in Gladwell’s words, “world-class in any field.”)

Even if you plan to move from employee to entrepreneur, the principle of “leapfrogging” is the same. For example, I know some folks who began pursuing their goal of franchise ownership by taking night classes to learn accounting, marketing, and business management. I also know a few who went to work at an actual franchise location. They may have started behind the counter, cleaning the bathrooms, or driving a delivery truck, but they learned the business from the ground up, inside-out.

Which group of people do you think actually owns a franchise today? Of those I kept track of, a large percentage of the “book learners” ended up staying with their existing job or going back to their old profession. Those that jumped in and learned the business “hands-on” are counting their money as franchise owners.

If you’re contemplating a career change that involves switching industries, determine the minimum professional or legal requirements for the job, and pursue those. Otherwise, spend time on what matters, in an actual work environment. You’ll learn which tasks have the highest priority and how to make sure they’re done right.

For example, do you want to sell real estate? Get a license and find a broker or team leader to be your mentor, while you’re on the job.

Want to build custom homes? Get a job with a general contractor who specializes in new home construction. You may have to push a broom for six months or spend most of your time walking permits through the city’s building and safety department, but at the end of a year, you’ll know far more about the actual business of construction, including the priority of making a profit, than the majority of new graduates with a degree in construction management.

What about making a transition to a high-tech industry? The cutting edge of technology-based businesses generally changes faster than the associated course curriculum available through a traditional university. Learn what you need to know from online courses, blogs, and publications. Unless you’re going to pursue pure research, a potential employer will be looking at more than your tech background and formal education. Attitude, initiative, professional goals, and personality have always been important to employers, and often make the deciding difference in getting the job you really want.

That’s it for this episode.

I welcome your feedback and want to hear your comments and questions. And no, it doesn’t have to be a question about a specific episode. If your question is about business, about personal success, or about how to derive more meaning from your work, I want to hear from you. You can contact me by email at roger@rogerreid.com

Thanks for listening and we’ll see you next time. 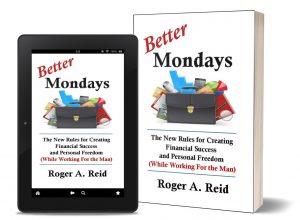